Agriculture has been a weapon of choice in the escalating trade war between the world’s two largest economies.

With China officially pulling out of buying U.S. agricultural products, American farmers are losing one of their biggest customers. It could be a devastating blow in an already tough year for crops and commodity prices. It may also dent U.S. gross domestic product and hurt companies like Deere, whose business is directly tied to farming in the Heartland.

“Sales have already been lower this crop year because of the existing tariffs. If we went all the way to no China exports whatsoever, that would of course result in even larger market and price impacts,” said Pat Westhoff, director of the Food and Agricultural Policy Research Institute at the University of Missouri. “Cutting China completely out of the market would be a very big deal.”

China made up $5.6 billion in U.S. farm product exports in 2018, according to the U.S. Census. It’s the world’s top buyer of soybeans and purchased roughly 60 percent of U.S. soybean exports last year. Westhoff estimated that soybean prices have already dropped 9% since the trade war began last July.

From September 2017 to May 2018, soybeans exports to China totaled 27.7 million tons. That number dropped by more than 70% to 7 million tons during the same nine-month period in 2018 and 2019, according to an analysis by University of Missouri. 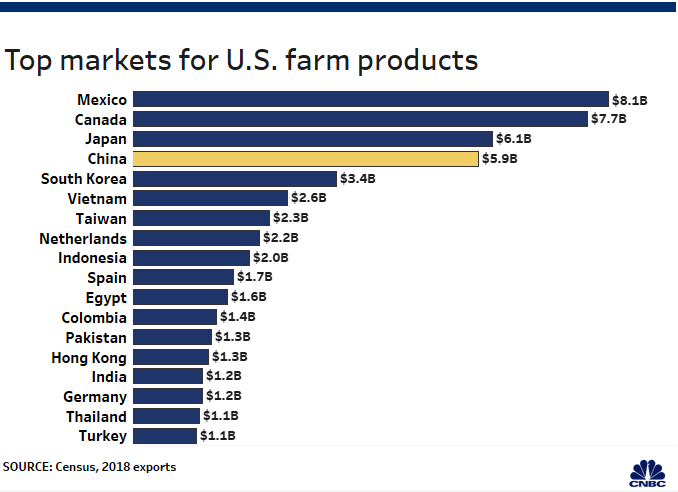 Westhoff estimated an additional $4 billion drop on soybean exports after the effects of tariffs but before the total loss of China as a customer. Tariffs also have a ripple effect across other crops, he said. With less demand for soybeans, farmers end up planting more crops like corn. That results in lower corn prices because there’s much more supply.

Former Iowa Lt. Gov. Patty Judge said the loss of a trading partner like China sets up a “dangerous situation.”

“There are going to be some serious repercussions for farmers,” Judge said.

China is the fourth largest market for U.S. farm exports, behind Canada, Mexico and Japan. She also highlighted a “languishing” trade pact with Canada and Mexico that has yet to be signed. New tariffs are another “financial whammy on top,” said Judge, who was also Iowa’s secretary of Agriculture.

While farming exports are a relatively small portion of the United States’ annual $20 trillion in GDP, Judge said it will directly hit farmers andexacerbate other problems they were already facing.

U.S. net farm income has been falling in the past six years, well before the effect of tariffs. Income has dropped 45 percent since a high of $123.4 billion in 2013 to about $63 billion last year, according to the U.S. Department of Agriculture.

In addition to tariffs, farmers were faced with floods and African swine feverthis year, which has softened demand for soybean and farm products that pigs feed on. The White House began rolling out a $16 billion federal aid package in May to help farmers weather the trade war and other circumstances. But Judge said much of that bailout has skipped over small farmers and isn’t widely embraced as a permanent solution — at least in Iowa.

“Farmers want to have a fair profit at the end of the year— they would like to do that in the marketplace rather than through a government program,” Judge said, adding that it’s also difficult for small farmers to get access to loans if they don’t have certainty of customer demand to pay it off.

On Tuesday, President Trump tweeted that farmers know that China “will not be able to hurt them,” since “their President has stood with them.”

Join more than 200,000 readers. Sign up to our newsletter in the following way and receive the most important news of the agri-food industry of Mexico and the world